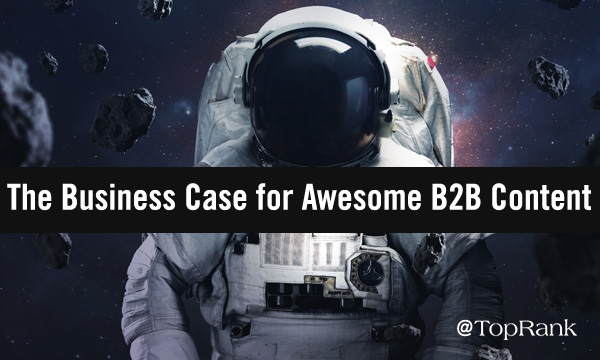 Have you seen Everything Everywhere All at Once? It’s a must-watch for everyone, but especially B2B marketers.

The movie tells a simple story about healing generational trauma. But it does so using multiverse travel, kung fu fighting, a truckload of googly eyes, and much more.

Simply put, it’s awesome. You have to admire the bravery of both the filmmakers and the financiers, who read this script and went, “Yup, that seems reasonable.”

Marketers could use a healthy dose of that kind of courage. Awesome content doesn’t overwhelm the story you’re telling the audience — in fact, it makes your message more likely to stick.

Here are a few great examples of awesome B2B content smartly amplified to get amazing results. If you’re having trouble convincing the higher-ups that creative content makes good business sense, let these help you make the case.

Productivity solution Smartsheet partnered with TopRank Marketing to raise awareness of their platform’s Microsoft Teams integration. We settled on a campaign that would allow for amazing influencer content, stunning visuals, and a hook to get the audience involved in creating their own content.

Then we asked productivity and collaboration experts to share their workstyle and how they collaborate best with other types. The result: fun, lively video and static content that people love to share.

Due to the awesomeness of this content, and the strategic influencer amplification we built in, this campaign saw:

MailChimp Mangles Its Own Name

What do you do when a podcast host mispronounces your company name in a paid ad? If you’re MailChimp, you lean into it with a creative campaign that revolves around words that kind of sound like your brand name.

The “Did you mean MailChimp” campaign pushed the boundaries of awesome, encompassing surreal short films, a bold new fashion statement, a snack food, a musical app, and more:

All of it was designed to get people talking about, and searching for, these strange word combinations (WhaleSynth? KaleLimp?). Thanks to some savvy SEO, each phrase would prompt Google to say, “Did you mean MailChimp?”

This campaign earned free press in everything from Rolling Stone magazine to Buzzfeed, ultimately garnering:

Mondi Brings in a Human Touch

How do you sell the virtue of physical media in a digital world? When their new graphic design paper, Pergraphica, struggled to find a market, Mondi faced that dilemma head on.

The “Catching Feels” campaign highlights how the experience of holding a tangible object can affect our emotions — in other words, how feeling leads to feelings.

The campaign included partnering with Adobe Stock to create a beautiful book of digital art made physical. The book featured six different artists, presenting not just their artwork but also the stories underlying each piece’s creation.

By combining wordplay, a beautiful physical object, and compelling stories, Mondi was able to realize a 35% increase in sales.

Cloud-based marketing solution Demandbase wanted to make a big impression with their brand relaunch. They had partnered with three other martech solutions to create the ultimate Smarter GTM™ platform. Now, all they needed was a hero or two to grab the public’s attention.

TopRank Marketing worked with the brand to create an interactive, animated comic book based on the brand’s new mascot, DeeBee. Together, we recruited some of the giants of the industry to lend their advice — and be transformed into superheroes.

We supported the launch with blog and social first content from our influencers, as well as social images and pre-written messages to make sharing easy.

Once the project was launched, the larger marketing influencer community took notice. We saw organic re-sharing from 19 influencers who were not included in the asset, with a potential audience of over eight million.

There are many strategic and tactical elements that make for a successful piece of B2B content, of course. There’s influencer co-creation, paid and organic amplification, supporting content, and beyond. But all of that promotional effort works a whole lot better for content that is undeniably awesome.

It’s one thing to earn attention — anyone can shout, “Hey! Look over here!” It’s quite another to reward that attention in a way that sparks engagement and inspires re-sharing. That’s where awesome content comes in. In the all-out battle royale for audience attention, to the awesome go the spoils.

Want to up your awesomeness quotient? Let’s talk.

And seriously, go watch Everything Everywhere All At Once. Trust me.