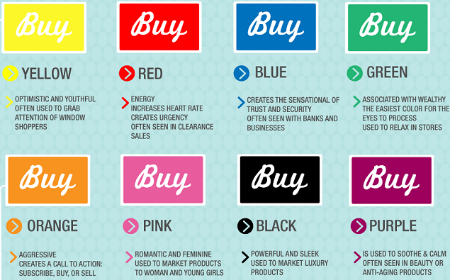 How Do Colors Affect Purchases? –  For retailers, shopping is the art of persuasion. Though there are many factors that influence how and what consumers buy, a great deal is decided by visual cues like color. When marketing new products it is crucial to consider that consumers place visual appearance and color above other factors such as sound, smell and texture.  KISSmetrics

Twitter Launches Card Analytics to Let Publishers Monitor Impressions, Clicks – The dashboard shows impressions, URL clicks, and app installs of a publisher’s tweets and mentions by other users, as well as easy ways to measure favorites, retweets, and follows. If Twitter can teach publishers how to create better content, the service as a whole will become more informative, engaging, and, ideally, money-producing. Here’s a video that explains the features in more depth. TechCrunch

Facebook News Feed Tweak Downplays Text Updates From Pages – The latest News Feed algorithm tweak will likely be good news for users, but could prove to be another headache for brands. A Facebook spokesperson says that they will start showing more text status updates from users in the News Feed, but it will downplay the number of text status updates from Pages. The change was based on an observation that Facebook users respond better to text posts from other users than they do from Pages. Mashable

Apple’s Next China Challenge Comes From Local Smartphone Rivals – China’s brands are likely to do well as demand grows for inexpensive smartphones. “Cheap devices are not the attractive segment that normally grabs headlines, but IDC data shows this is the portion of the market that is driving volume,” said Ryan Reith, program director with IDC’s Worldwide Quarterly Mobile Phone Tracker. Business Week

The Instagram Rule of 11 – The number 11 represents a simple but important tipping point. Once you earn 11 likes on Instagram for a photo that you’ve posted, the service shrinks down the likes from a list of your friends’ handles to a number. For many users, this simple milestone is important. In a study MRY conducted on Millennials’ technology behavior, respondents noted passionately the need to reach this number. Apparently, there’s an Instagram “rush hour,” which takes place when people are commuting home around 5 p.m. to 7 p.m. ClickZ

Google Ends its Motorola Misadventure – In an attempt to mimic Apple, acquiring Motorola was a failure. Phones such as the Moto X have not performed spectacularly; at the same time, Google’s ownership of Motorola irritated other handset makers, such as Samsung Electronics. Google also wanted to get its hands on Motorola’s deep patent portfolio and to neutralize the threats Motorola was making against Google and other members of the Android world. While they succeeded in avoiding an all-out Android legal disaster, they paid a price – selling Motorola for $9.6 Billion and effectively saying goodbye to the smartphone business. Forbes

4 in 10 Top Retail Brands Using Vine – Also of note, adoption of Pinterest has grown from 78% in to 89%, reports 8th Bridge, putting the visual platform on par with Twitter. Separately, 54% of retailers either already use (13%) or plan to use (41%) social login within the next year. If those plans materialize, retailers should be collecting a lot more social data; currently, the analysis finds that only 27% are collecting customer likes and only 2% are asking for a customer’s friend list and the friends’ likes. Marketing Charts

How the Top 100 Brands Use Twitter – Audiences for brands grew by 20% in Q4 2013 and brand tweets that included pictures and content links generated the most engagement. The average number of followers for the top 100 brands is 870,000, however 58% of the top brands have over 100,000 followers. Read the research as well as ways to increase engagement from Simply Measured. eConsultancy

Report: State of Mobile Advertising  – The fourth quarter of 2013 closed yet another year of impressive growth for mobile advertising. In the smartphone OS race, Android is now the leader over iPhone. Within the quickly-growing tablet market, Apple still maintains a significant lead, but Android is staking its claim, and tablet impressions are on the rise. Read more insights and trends to watch for 2014. Opera MediaWorks

10 Web Analytics Trends for 2014 – Two trends that captured my attention are 1) Google compensating for ‘not provided’, e.g. If not showing the exact search phrase, perhaps they can expose search phrase categories or better integration with Web Master Tools; and 2) Better tools for integration with third party data. Since 2013 was the year of Big Data, 2014 may be the year we see web analytics platforms help site owners to have a more 360 degree view of their prospects and customers. What trends do you see ahead? Mashable

Google Adds a Knowledge Graph Popup to Search Results – The popup adds more information about certain search results, which sounds like it should be good for searchers. While this extra information could be good news for site owners, the popup also adds up to three extra links to the search result that don’t go to your website. Since it is Knowledge Graph data, the popups rely heavily on Wikipedia, which also may not necessarily be a good user experience, depending on how you feel about Wikipedia.  Search Engine Land

New Data: 50% of Companies Use More Than One Marketing Automation Solution – Even if a lot of companies are using more than one marketing automation software solution, there’s really no one reason to explain it all. But, some might be spending way more money on multiple marketing automation solutions than they probably need to. Be sure to read the comments which are particularly insightful. Hub Spot

Facebook Ads Drive 60% Increase in Sales Revenue – Brands and companies are now being encouraged to concentrate on paid ads for their Facebook marketing strategies and forget the free channel of running a Facebook page. The latest report from Kenshoo seems to bolster the belief that this change in direction means Facebook’s becoming a more ad-driven marketing landscape, rather than a content driven one. eConsultancy

Foursquare Vulnerability Exposes 45 Million Users’ Email Addresses – According to a penetration tester and hacker, Jamal Eddine, an attacker could and did extract email addresses of all 45 million users just by using a few lines of scripting tool. Basically the flaw exists in the invitation system of the Foursquare app. He reported the flaw to Foursquare’s Security Team, and they have finally fixed the issue. The Hacker News

Report: Marketing Emails Opened on Mobile Devices Continue to Climb – Sixty-five percent (65%) of marketing emails were opened on mobile devices during the last quarter of 2013 up from 61% for Q3, most likely attributed to seasonal holiday shopping. Apple mobile devices beat out Android mobile devices for usage by a significant percentage, 50% vs. 14%, respectively. Marketing Land

Paid Search Advertising Accelerates in Q4 2013 – Paid search advertising increased significantly in the fourth quarter of 2013, driven by the use of Product Listing Ads and mobile devices during the holiday season. Smartphones and tablets also drove the paid search gains. (See above.) ClickZ

New Data: 9 Revealing European Content Marketing Trends to Watch – Curious about the state of content marketing in Europe? Take a look at this SlideShare and some recent data to find out about our content marketing compatriots in Europe and their marketing efforts. HubSpot

Clickbait bites. Downworthy is Actually Doing Something About it – Marketers, publishers, and anyone on social-media should take notice: the backlash is officially here. One developer has had it with sites that post hyperbolic headlines promising to blow your mind and change your life. She has created an antidote to the rampant click-bait with a Chrome browser plugin, appropriately called Downworthy. Inc.

On “What’s the Difference Between Content Marketing and Content for Links? The Wrong Answer Could Cost You,” Jay Baer said, Exceptionally rich insight here, Lee. I hope this post gets the attention it deserves because this distinction will define our industry for the next 24 months.

On “Podcasting: Storytelling for the 21st Century – Pros, Cons, Examples and Best Practices,” Loz James said, Great post Nicolette. I love podcasting and get more listeners to my podcast than visitors to my blog – which is great as they’re both doing well. It’s the idea of connecting directly with people so you can help them that appeals to me – and on a personal level you can learn so much and have some fascinating discussions with your guests.

Bill Freedman said, Podcasts are great. I’m a regular consumer. Your article is thorough and well written. Nonetheless, I’ve chosen not to put podcasts in my marketing mix. Not now at least. Why? It is hard to build a podcast audience and keep them coming back. What’s more, my favorite podcasts: The Moth, Planet Money, Leo Laporte, This American Life, Harvard Business Review, all started with a strong non-podcast brand and audience before adding a podcast to their mix. Add to that professional on-air talent and high quality production. Podcasting is easy to do, but very, very, very hard to do well enough to attract and maintain an audience. My belief is that it is easier to build a video channel than a podcast channel. But that is a different topic for a different day.

John Trader said, Nicolette, great article! I absolutely love the idea of providing an email address at the conclusion of the podcast for people to submit questions and then scheduling a subsequent podcast to answer them! I made podcasts a regular part of my marketing strategy in 2012 and have seen very positive results thus far. I need to take your advice and write more of an outline than a narrative when I speak so it doesn’t sound so scripted. That’s definitely a weakness for me. Thanks!

On “25 Social Media Marketing Experts You Need to Know According to LinkedIn,”Tia K said, #nailedit – This listed many of the top experts that I follow! But also a few others I definitely need to start watching 🙂 Downloading the e-book now.