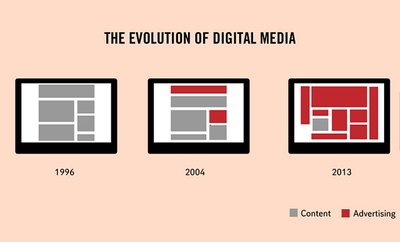 Mobile Now Makes Up 59% of Facebook’s Advertising Revenue – Facebook’s investments in mobile are paying off. The world’s largest social network reported $642 million in profit in the quarter ending March 31–a 193% increase from the same period last year. With $2.5 billion of revenue, the company’s top line jumped 72% year-over-year. Fast Company

Twitter Sharing Outpaces Other Platforms as Email Falls – In the first quarter of 2014, Twitter sharing is up by 43 percent, while email falls 25 percent. Social sharing on Twitter has outpaced other platforms, while email has taken a large nosedive, according to ShareThis’s Q1 2014 report. ClickZ

Facebook Referring Almost 20 Times More Website Traffic Than Twitter – Referral traffic from Facebook is rapidly increasing, to the extent that as of March, the social network referred more than one-fifth (21.3%) of traffic to the average website, according to the latest social media referral report from Shareaholic. Marketing Charts

Twitter Drives $0.62 Revenue Per Referral Visit (Facebook: $1.24, Pinterest: $0.65) [STUDY] – What’s the price of a Twitter user? According to a new study from Adobe, it’s $0.62 per referral visit, a figure which is up marginally from last year. AllTwitter

Schema Markup Shows In 36% Of Google Search Results, But Almost No Websites Use It [STUDY] – More than one-third of Google’s search results incorporate Schema.org rich snippets, but only a tiny fraction of websites are actually using the markup code. Search Engine Land

Facebook ad CTR is up 160% year-over-year: stats – After algorithm tweaks led to huge changes to a brand’s ability to gain organic growth, and a simplifying of the process of how to market your brand on Facebook using paid ads, it seems Facebook’s ad revenue is increasing in line with these changes. Econsultancy

Twitter’s Redesigned Web Profiles Are Here and Ready to Go – Twitter’s new Web profile design is here and now available to all. Earlier this month, ClickZ reported that Twitter would be redesigning its profile pages. Low and behold, just two weeks later, here they are. ClickZ

Twitter Launches Mobile App Promotion Suite – Twitter acquired MoPub way back in September of last year but, until now, hasn’t done much with the purchase. Well, be still your beating heart, as Twitter has just unveiled a new mobile app promotion suite which uses MoPub technology, which will allow marketers to promote their apps both on and off Twitter. AllTwitter

On Facts Tell, Stories Sell – The Importance of Story Before Marketing, Barbara Mckinney said, “Storytelling has been the buzzword off and on since advertising became a thing. It’s always coming out of the buzzword pile because, at the end of the day, it’s a timeless skill. Stories have been an essential driver of change throughout human history.”

Ryan Biddulph contributed, “My brand Lee is built on the story of a guy who went from overworked security guard to world traveling internet lifestyle guy. Tell stories. Draw in like-minded people. We all have such interesting stories to tell, if we’ll just tell them on a persistent basis. Awesome message.”

Renee Groskreutz shared her thoughts on Online Marketing News: Photos > *, Twitter Has A Problem, Mobile Makes A Big PPC Impression, “I think that it will be interesting to see if Twitter can deliver paid ads to me that I care about. It seems that Hulu is getting close with this but not quite there yet. There was a time when Hulu would ask if the ad was relevant to me or not. If Twitter came out with something like this, it would be interactive and fascinating.”