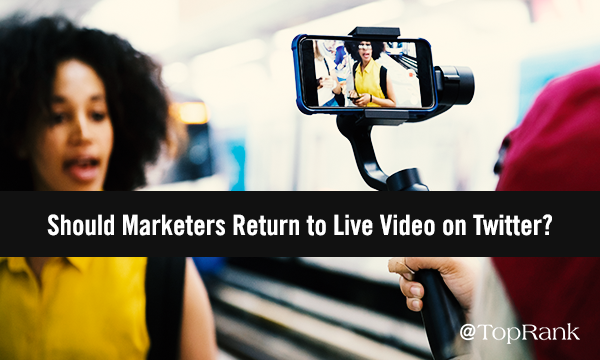 Once a pioneer in bringing live video to the social media world, Twitter fell behind the likes of Facebook, LinkedIn, and others as this format rose to mainstream prominence. However, the platform’s recent move to make live video more easily discoverable shows Twitter is recommitting to video.

But the question is: Can Twitter recapture the magnetic energy of live video?

When I attended Jane Weedon’s keynote speech at Content Marketing World last month, I was deeply struck by this remark from Twitch’s Director of Business Development:

“Authentic and real-time video can be better than immaculately produced when it comes to engaging an audience.”

Her company’s model serves as proof of this assertion. Twitch welcomed more than 15 million daily visitors last year, and continues to see explosive growth, largely because of this dynamic.

There’s nothing too fancy about most of the platform’s broadcasts — it’s just real people on-screen in real-time, creating a uniquely relatable and immersive experience for viewers.

Increasing engagement is on the mind of social media marketers everywhere. As such, Twitter’s efforts to rejoin the live video fray are very much worth tracking, so let’s take a deeper look. I’d almost entirely forgotten about this until a coworker reminded me, but Twitter was in on live video long before it was in vogue, having acquired Periscope back in 2015 while the live-streaming app was still in beta.

For whatever reason, that partnership never amounted to much, and real-time video has yet to take off on Twitter feeds. But the company is renewing its push to make this content more prominent and discoverable, announcing in a mid-September tweet:

“We’re making it easier to find and watch live broadcasts. Now, when accounts you follow go live, the stream will appear right at the top of your timeline.”

This falls in line with similar efforts from other social media channels. If you’ve logged into Facebook over the past several months, you’ve probably noticed a high prioritization of live-video broadcasts in your feed, even those from contacts you rarely engage with.

The rationale is clear. Video content is highly engaging, and when a live broadcast hooks a viewer it’s likely to keep them plugged into the site or app.

Twitter, in particular, is well suited for real-time video, because the platform’s experience is so strongly driven by what’s happening in the moment. Sure, Twitter’s content display algorithm has a tendency to (sometimes annoyingly) elevate hours- or even days-old posts in your feed, but when you click refresh you’ll get up-to-the-second tweets at the top.

This is part of what makes Twitter such an addictive destination for users. But it also presents a marketing conundrum — one this new move might help solve.

The trouble with Twitter’s transitory feed is that the content becomes somewhat ephemeral. If your tweet isn’t noticed immediately, it can quickly become buried under a deluge of newer posts, especially if it fails to garner enough initial engagement for algorithmic traction.

This has made life challenging for social marketers searching for organic results on Twitter. And that’s exactly why this live video push is intriguing.

“Now, live-streams will occupy more prominent space in the app screen, which could make it a more appealing option for businesses to consider. Having the option to get your streams shown right in front of your followers’ eyes could help raise brand awareness, and get people interacting with your content.”

Precisely. At a time where social media reach keeps growing more elusive for brands in the face of saturation and competition, it’s critical to take advantage of initiatives being stressed by the companies behind these channels.

TrackMaven CEO Allen Gannett was able to rack up millions of organic views with LinkedIn video, in large part because he recognized LinkedIn’s internal emphasis on growing and popularizing its native video feature. He figured out how to ride the wave, and turned his #AllenAsks series into a tsunami force.

Ready to dive in? Before you and your brand press record, there are a few things to keep in mind.

This tactic is more about growing engagement than reach. The increased visibility of live video on Twitter only applies to your existing followers. So while you will stand a better chance of grabbing their attention, live-streaming won’t necessarily help you attract new eyeballs.

Live video requires preparation and improvisation. There’s something tantalizing about live broadcasts, which helps explain why numerous sitcoms and dramas have experimented with the format as a means to boost ratings. For the viewers, there’s a sense that anything can happen, as you’re actually watching an event play out with no editing, no do-overs. That’s also what makes it unnerving for brands and marketers. Before going live, make sure you prep thoroughly, and feature people with a knack for thinking on their feet.

Live video also requires a purpose. As with any marketing tactic, you shouldn’t just do this for the sake of doing it. Is the live format actually adding something to your content? Is there a reason for using this approach, other than simply angling for exposure? A while back, our Caitlin Burgess offered up nine clever ways to activate live video on social media.

Without a doubt, Twitter is one of the toughest nuts to crack for social media marketers. But there are ways to make a real impact on the platform, and this latest development with live video offers one such pathway.

For further guidance, check out some of our past posts full of Twitter marketing tips and insights: