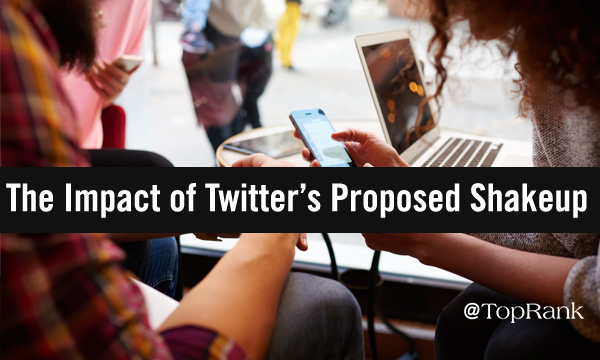 Twitter needs to change. This truth is acknowledged by everyone affiliated with the social media network, including its co-founder and CEO.

Jack Dorsey sat with Chris Anderson and Whitney Pennington Rodgers of TED last month for a roundtable discussion about the state of his company, and the path ahead. Specifically, their chat centered on Twitter’s conversation health, and how to improve it.

During the talk, Dorsey laid out some interesting ideas. Today we’ll touch on several of them — including one proposed shift that could fundamentally alter the platform’s very fabric — with an eye on the potential impact for B2B marketers and influencers.

This issue isn’t new. I wrote last year on this blog about Twitter’s efforts to tame the trolls and restore civility to its discourse. At the time, the network had recently enacted a massive purge of fake and suspicious accounts, and was also launching a pair of academic projects regarding diversity of viewpoints.

But eight months later, the underlying problems haven’t much improved. In the most striking moment of TED’s roundtable, Anderson confronts Dorsey directly about the widespread perception of an “all talk, no action” approach from Twitter. To signal the urgency, Anderson draws up a Titanic metaphor (a man after my own heart), with Twitter’s CEO as the captain. In this scenario, Dorsey listens reflectively as shiphands express their concerns about the iceberg ahead.

“And you go to the bridge, and we’re waiting, and we look, and then you’re showing this extraordinary calm, but we’re all standing outside, saying, ‘Jack, turn the [F-ing] wheel!’”

Are Dorsey and Twitter finally ready to take control and change course? One idea he offered, in particular, suggests that a major transformation could be on the horizon.

Some of the possible changes hinted by Dorsey are relatively minor and uncontroversial. He wants users to be able to hide their replies. He wants to deemphasize follower counts and ‘likes’ on tweets. His team plans to analyze conversation health across four parameters (shared attention, shared reality, receptivity, variety of perspective), and… well, I find myself in agreement with Bill Murphy Jr.: “I don’t understand exactly what Twitter hopes to do with this analysis.”

But the bombshell of the interview came with Dorsey’s allusion to an entirely new structural underpinning for Twitter. Here’s the full answer he gave when asked about how he feels he can meaningfully shift behavior on the platform:

Well, one of the things — we started the service with this concept of following an account, as an example, and I don’t believe that’s why people actually come to Twitter. I believe Twitter is best as an interest-based network. People come with a particular interest. They have to do a ton of work to find and follow the related accounts around those interests. What we could do instead is allow you to follow an interest, follow a hashtag, follow a trend, follow a community, which gives us the opportunity to show all of the accounts, all the topics, all the moments, all the hashtags that are associated with that particular topic and interest, which really opens up the perspective that you see. But that is a huge fundamental shift to bias the entire network away from just an account bias towards a topics and interest bias.

As with his conversation health analysis piece, it’s not entirely clear to me what Dorsey is advancing here. Is the idea that we will no longer be able to choose who we follow, and our feeds will instead be based entirely on topical areas of interest? (For me personally, this would be annoying, because there are certain people within my areas of interest that I actively choose to follow, and some I actively choose not to. I don’t think I’m alone.)

Or maybe it’s more about how Twitter’s algorithm serves us content outside of the people we follow. Right now, this does seem to be mostly account-driven. For example, you’ll see a tweet on your timeline from someone you’re unfamiliar with, and a message above will explain it was selected due to other users (i.e., “@NickNelsonMN and @CaitlinMBurgess follow this person”). Shifting this to more of a topical basis wouldn’t deter the ability to customize one’s own feed, and could actually be quite beneficial if done right.

In either case, the marketing implications are worth considering.

What Could All This Mean for Marketers?

Without having an exact idea of what Twitter is planning (or whether it will actually implement anything at all, given its history), we can’t draw any definitive conclusions. But given our continual tracking of the ever-changing social media marketing universe, as well as emerging influencer marketing trends, a few thoughts do initially cross through my mind, and mostly they are positive.

Removal of Rancor and Vitriol Are Good for Business

One area where Twitter has shown demonstrable progress is in scalably reducing abuse. Dorsey notes that “about 38% of abusive tweets are now proactively identified by machine learning algorithms so that people don’t actually have to report them,” adding that this is up from zero percent a year ago. It’s part of an effort to “take the burden off the victim.”

Setting aside the snark, let’s acknowledge that this is an important step in the right direction. Twitter’s reputation as a cesspool of negativity and hatred can make it an uninviting destination for any brand. Legitimate progress on this front is undoubtedly a plus.

Topic-based Visibility Could Be Great News for Influencers & Marketers

Large or small following, more established and rising influencers are often dedicated to growing their profiles within areas of specialization. If indeed Twitter moves to start serving people more topical content, it could be a great way for these individuals to get in front of users who are interested in the subjects they cover but may not yet be familiar with them, or immersed in their extended networks.

This would also make leveraging Twitter as part of influencer marketing efforts more appealing to B2B brands. Imagine if tapping an authoritative voice in, say, fintech not only gave you credible access to their direct following, but also to a much larger audience of users engaged with that topic?

Topical relevance is of the utmost importance, ranking as a top B2B influencer marketing focus. Brands need to be speaking the language of their customers and reaching them in the right context. This development might present an opportunity to better align marketing messaging, expertise, and audience on Twitter.

Impacts for Those Who’ve Built Large Audiences Are Ambiguous

If Twitter were to follow the more extreme version of Dorsey’s vision — pushing aside the traditional format of following accounts in favor of following topics — what would that mean for the people who’ve worked hard to build their own personal brands on the platform? Or, for that matter, the companies that have accrued thousands of quality followers through relevant, quality content?

I don’t think that’s necessarily what Dorsey was getting at. He might just be positioning this as a new method of discovery, rather than consumption. But again, he wasn’t especially clear and that leaves plenty of room for uncertainty.

As always, we’ll have to wait and see whether Dorsey and Twitter back up their ambitious visions of upheaval, and to what extent. It bears noting that the platform has a history of launching capabilities and features that aren’t aligned with what users want (the new desktop layout being the most recent example). They’ll need to tread carefully with something so essential as how our feeds are curated.

But with the company taking some undeniable steps toward curbing abuse and improving user experiences, while showing strong business performance and impressing advertisers in the process, Twitter seems to be sailing in the right direction. Fewer trolls and more substantive, expert content organized around topics would make the platform a stronger piece in any B2B digital marketing strategy.

Stay tuned to the TopRank Marketing Blog for more coverage of Twitter and the social media marketing space at large. In the meantime, I invite you to check out some of these past entries on the topic: